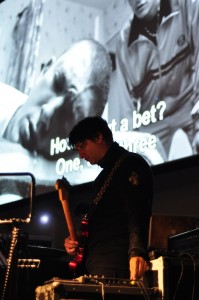 In March 2012 Asian Dub Foundation main man Steve Savale received a call from London based interactive film company Secret Cinema. Their founder Fabien Rigall had been inspired when he had attended the first ever screening of ADFs live soundtrack to the classic film La Haine at London’s Barbican Art Centre and subsequent screenings for David Bowie at Bowies London Meltdown Festival. Rigall spoke about his love of the event and his long time wish to recreate it.

The proposal. A screening of La Haine with ADF at the notorious Broadwater Farm Estate in North London on the eve of the London Mayoral elections.The previous summer an incident involving the fatal shooting of a Broadwater Farm resident by the police had started a riot that had got out of control and spread all over the country. Similarities to La Haines story of a post riot scenario on a deprived housing estate were obvious. The police and local council considered the event too dangerous and tried to ban it.In a short space of time the soundtrack would have to be recreated and that it would need the musicians who had played on the earlier events. Original bass player and ADF founding member Dr Das and drummer Rocky Singh hadn’t played in the band for many years.

They were contacted with a proposal and agreed it was an opportunity they couldn’t refuse.During rehearsals the vibe between the reunited musicians was obvious.

They were really enjoying playing together again.The event went ahead under heavy security and the vibe and reaction was electric. Two more sold out shows followed. One at London’s Troxy (1000 tickets sold in an hour after the show was announced) and the next night a show at La Trianon in Paris on the eve of the French Presidential elections. La Haines director Mathieu Kassovitz was engaged in a media spat with President Sarkozy and the event polarised the debate with live digital media projected onto the screen before the film started.Sarkozy was voted out and it felt like history was happening in and around it.

Kassovitz introduced the event by Skype from Los Angeles. Both shows had an electric atmosphere and at the end of the film the band played on..It felt like something special was being reborn. Further shows were added at UK’s Wilderness and Leeds Festivals.